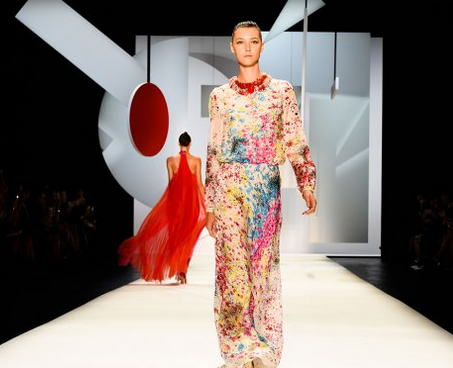 Backstage isn’t exactly how you would imagine it, but it is one thing…a pretty cool opportunity.  Models running about, makeup ;and hair people and displays of what’s going to be coming down the runway and on whom.  The scene behind the curtain for Monique L’huillier’s spring/summer 2016  collection was no different.

If one was going to describe the collection I would have to say it’s poppy in both color and design.  Dresses in bright flowy primary colors cascaded down the runway with a mix of  tailored lace silhouettes all  very feminine and indicative to L’huiller’s style which we love.

The beauty look was  a delightful flash of eye color topped with a slicked tiny ballerina bun.  Nails were a clean buff-like  color with a tip done in a color polish.
Val Garland on behalf of MAC Cosmetics had said before the show  “We’ve chosen to do a clunky, chunky liner, either in cyan blue or emerald green [MAC Chromaline in Hi Def Cyan and Landscape],”  When asked why she picked these two bold shades for the “rectangular” eye, Garland said, “when I was talking to Monique, we looked at the collection and she said ‘I’m working with a lot of primary colors,’ and I thought how can we do that, but have an intelligence? Yes, I could have done primary colors but I thought we had to have an element of sophistication.” Garland added that the cool hues are universally flattering for any skin tone.
Nails were given a “spring garden” look by Gina Edwards, for Morgan Taylor. “We created a beautiful twist to the French tip, which people think is outdated, but we elevated it and made it a little more chic,” said Edwards, who used blush-hued Simply Irresistible as a base and Later Alligator, a bold poppy shade, for a “chic” tip that “Monique loved.” Toes were given one coat of Simply Irresistible. 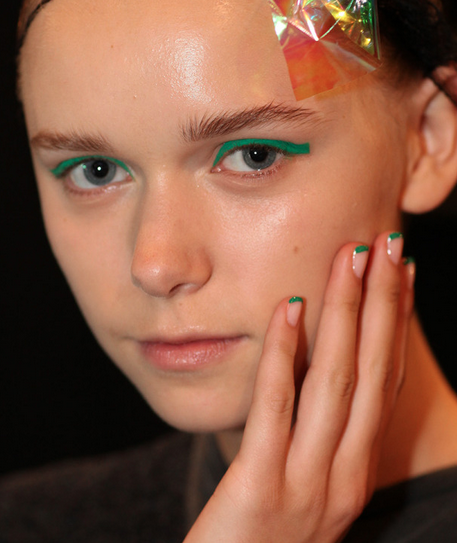 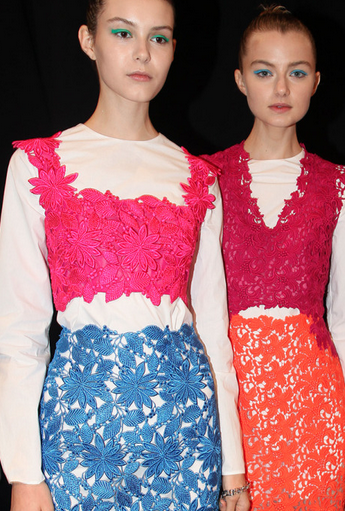