DIOR COUTURE PARIS…. THE CINCH IS BACK!

PARIS (AP) — The start of haute couture week in Paris is a must on any self-respecting fashionista’s calendar.
But day one of the French capital’s fall-winter 2012 shows was different: It’s what’s called a fashion event.
Monday was the debut of Christian Dior’s new designer Raf Simons — the first chance to see into the future of a storied powerhouse.
He is only their fifth designer since Christian Dior founded the company in 1946.
The anticipation was evident in the front row turnout: a who’s who of influence, from Marc Jacobs to Donatella Versace, Pierre Cardin, Riccardo Tisci and Diane von Furstenberg.
Ever since last year’s dismissal of John Galliano, the house has been looking for a new, stronger direction.
In Simons’ triumphant offering — which modernized the cinched waisted New Look — it would seem they’ve found it.
CHRISTIAN DIOR
Say it with flowers.
That was the clear message from new designer Raf Simons in his 1950s-tinged haute couture debut for Christian Dior.
When the normally exuberant house first hired the Belgian designer, known for his minimalist and linear style, it raised eyebrows.
But Monday’s show will win many over.
He revitalized with panache the curved Dior “flower women” silhouette.
It’s what Christian Dior, the man, used to describe his revolutionary 1947 New Look of cinched waists and full skirts that resembled inverted flowers.
One thing’s clear: Simons has done his homework.
In the four months since being named creative director, he’s delved deep into the house’s archives.
The result: a strong show in homage to Dior’s love of flowers, but never a servile one. 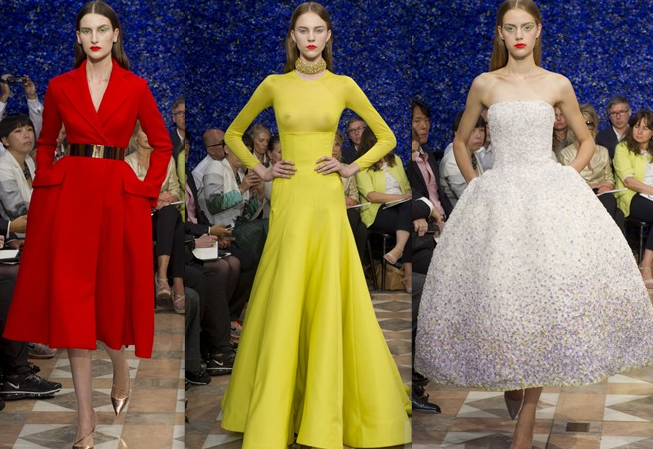 Simons owned it.
Fifty four diverse looks paraded through several sweet-scented salons, wall-to-wall in myriad multi-colored flowers.
The first pieces were among the strongest.
Simons truncated the New Look, pairing high-waisted A-line mini dresses with contemporary black pants.
These were followed by a series of clean A-line archive pieces in bright reds and pale pink.
Their clean lines with large, hip-level pockets signaled a break from the vivacity of Simons’ predecessor, John Galliano.
Dior’s been looking for fresh direction ever since Galliano was sacked last year for a drunken anti-Semitic tirade.
This collection shows they’ve found their man.
Simons aimed to create a new kind of couture. He said it wasn’t “just about reaching for a typical satin duchesse, a silk…but new forms.”
And this was certainly fresh territory.
One bright yellow, show-stopping evening dress might have come in silk, but its skintight sheer top exposed the model’s nipple ring.
Some of the looks in fur didn’t quite work, but the misses were outweighed by plays on traditional form.
In a clever touch, Simons transformed the Bar Jacket into a tuxedo-dress, turning its cupped pockets into a Madonna-style conical bra.
Simons’ show proves that change is a good thing. Now, Dior could well give Louis Vuitton and Hermes a run for their money.
J’adore DIOR!