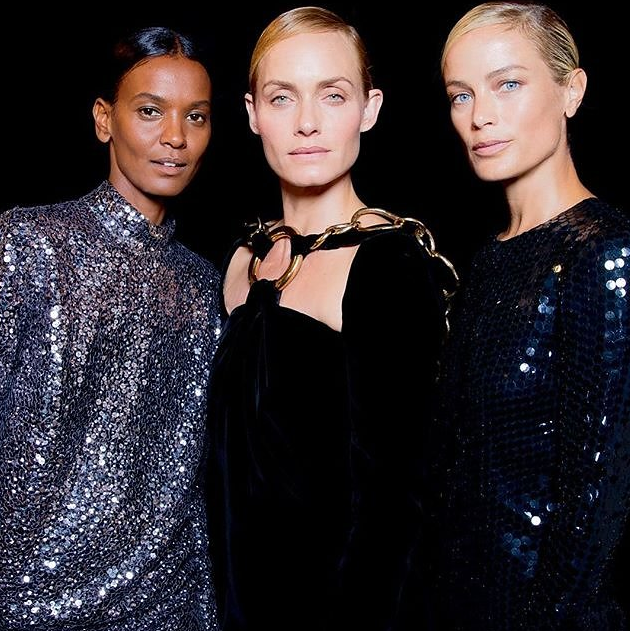 TOM FORD changing it up!

Leave it to TOM FORD to change up the game plan.  As most of you know, NYFW started this week with FORD laying the roadwork for a new direction in presenting collections.  The renown designer presented his FALL collection not his SPRING as most will do this week.

Ford is part of the first wave of designers embracing a radical new direct-to-consumer model that rethinks decades of industry-wide standard operating procedure. There’s no long-lead press, no editorials in magazines. The new concept banks on immediacy, shrinking the gap between when a customer sees the collection and when she (or he, Ford is also showing men’s) can buy it. As the designer put it, Fall is, “hanging downstairs, steamed, and ready to be flipped into the store tomorrow night.”

Ford is indeed the first major American designer to embrace an in-season model. A wave of them will follow in the days to come, Thakoon, Tommy Hilfiger, and others, among them. As of today, the A-listers in the crowd and non-celebs alike will be able to scoop up the Fall merchandise that appeared on the runway.  It changes decades of standard operating procedure, eliminating, or at the very least making more complicated to pull off, the months of attention magazines and online publications have lavished on collections in the past. The idea is to capitalize on the immediacy of desire, and quash the fatigue that can potentially set in when customers have to wait months in between runway shows and shipments to stores. Nobody will know if the gambit works until they try it.

The designer and filmmaker pulled out all the stops for his Fall 2016 show at the Four Seasons restaurant space last night, filling his runway with many of the big name models he has worked with over his decades-long career. Liya Kebede, Carolyn Murphy, and Natasha Poly have had a place in Ford’s roster since his Gucci days in the ’90s and ’00s, and the trio were reunited on his catwalk yesterday. Sharing the stage with millennial stars such as Gigi Hadid and Imaan Hammam, those classic Ford faces helped to give the show heavyweight glamour. The menswear lineup was led by Miles McMillan, Lucky Blue Smith, and Yassine Rahal, all of whom looked dapper in the collection’s streamlined tailoring.

Ford’s front row was just as supermodel-centric, with Naomi Campbell, Cindy Crawford, Lauren Hutton, and Karlie Kloss taking their places in the audience. Perhaps the rarest and most head-turning appearance of the night was Iman, who outshone almost everyone in the crowd dressed in an elegant crushed-velvet smoking jacket. 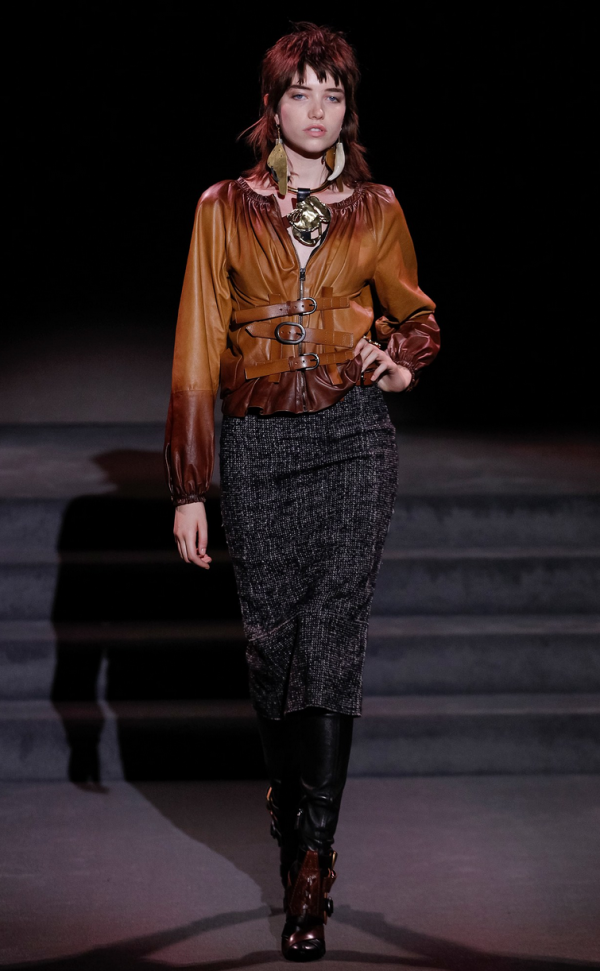 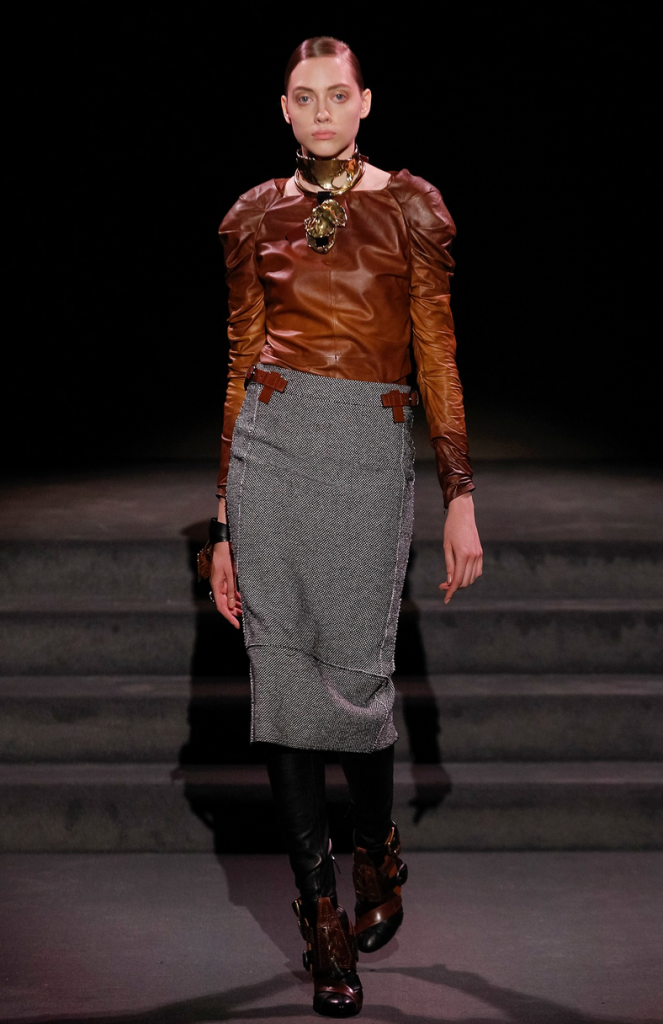 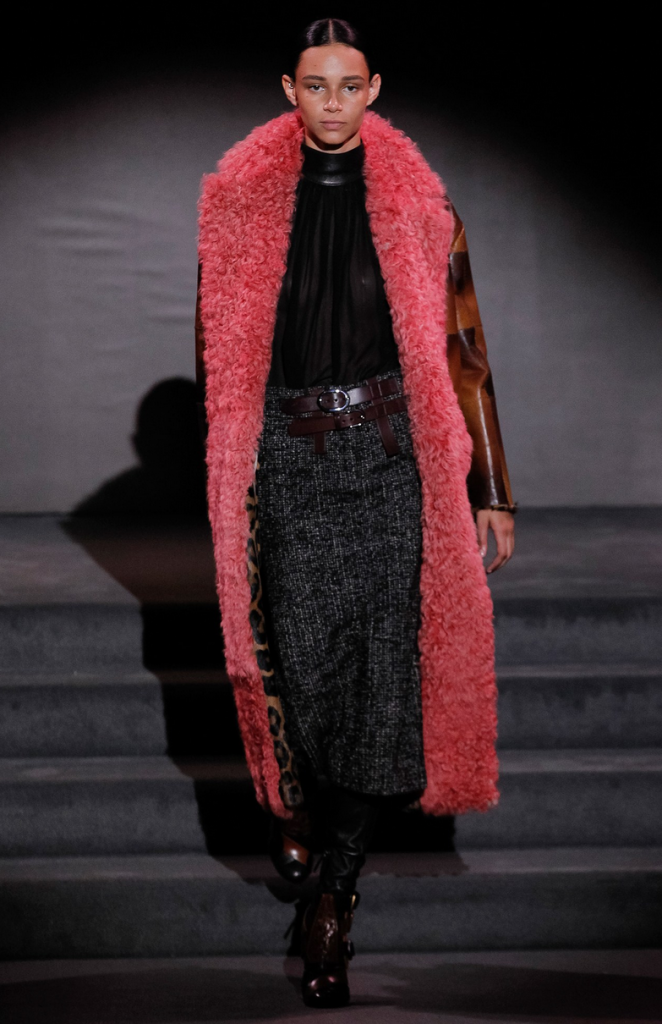 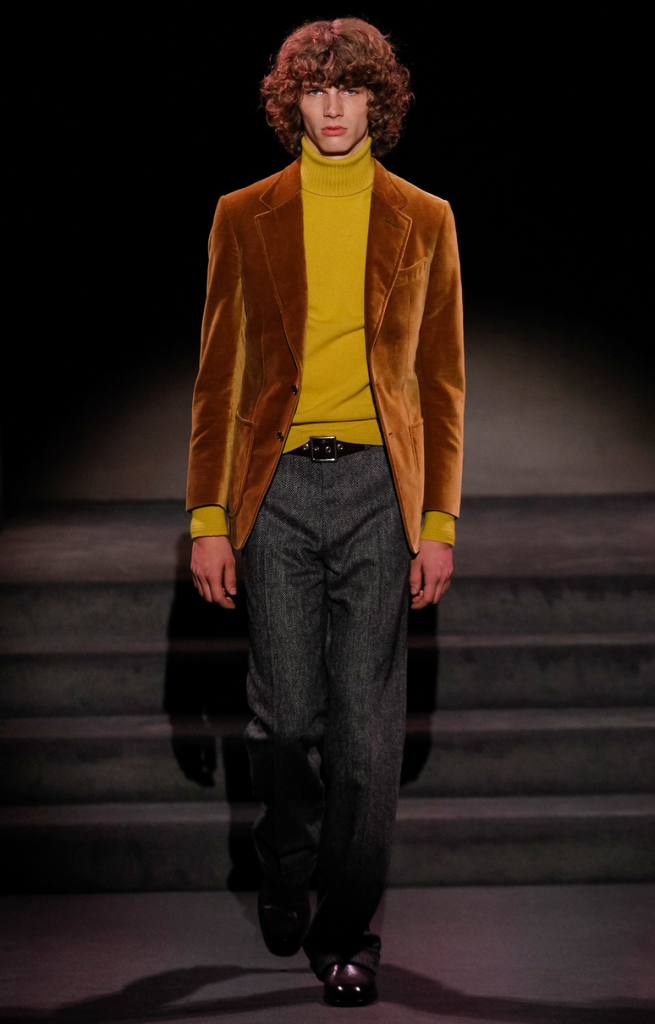 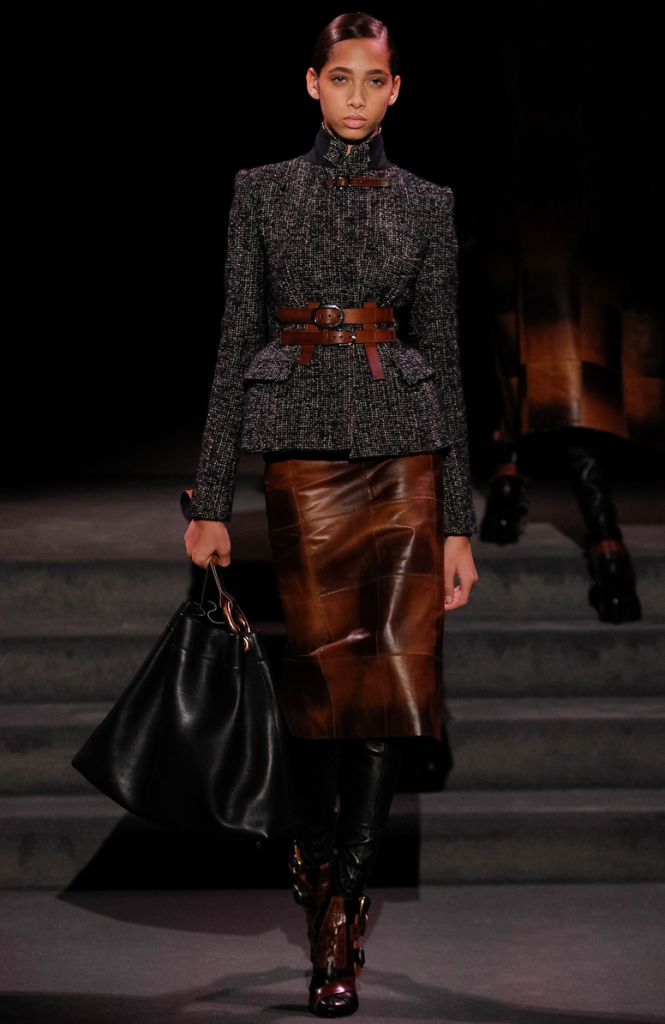 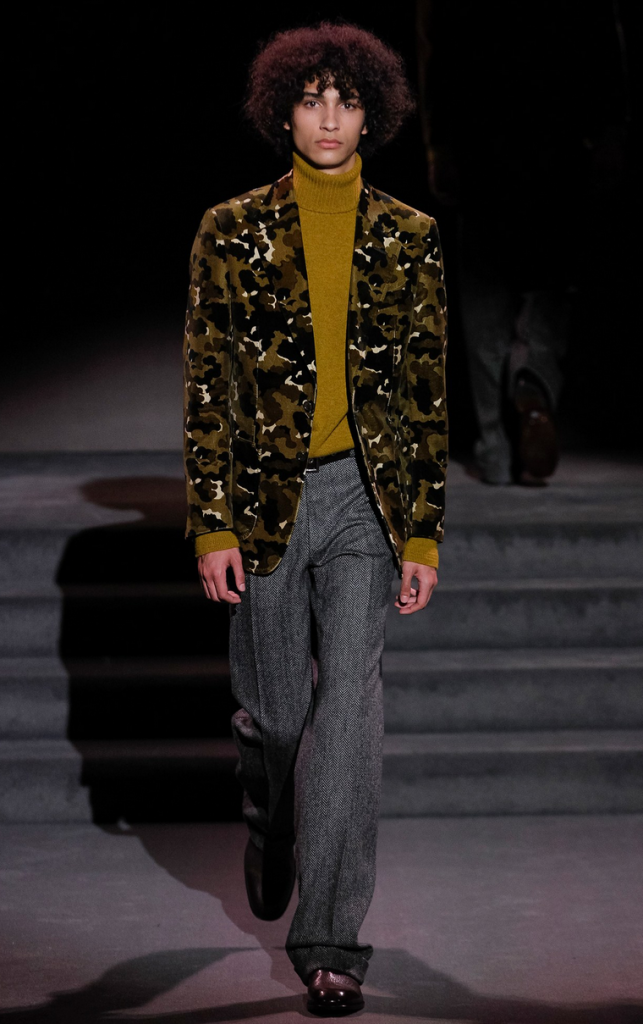 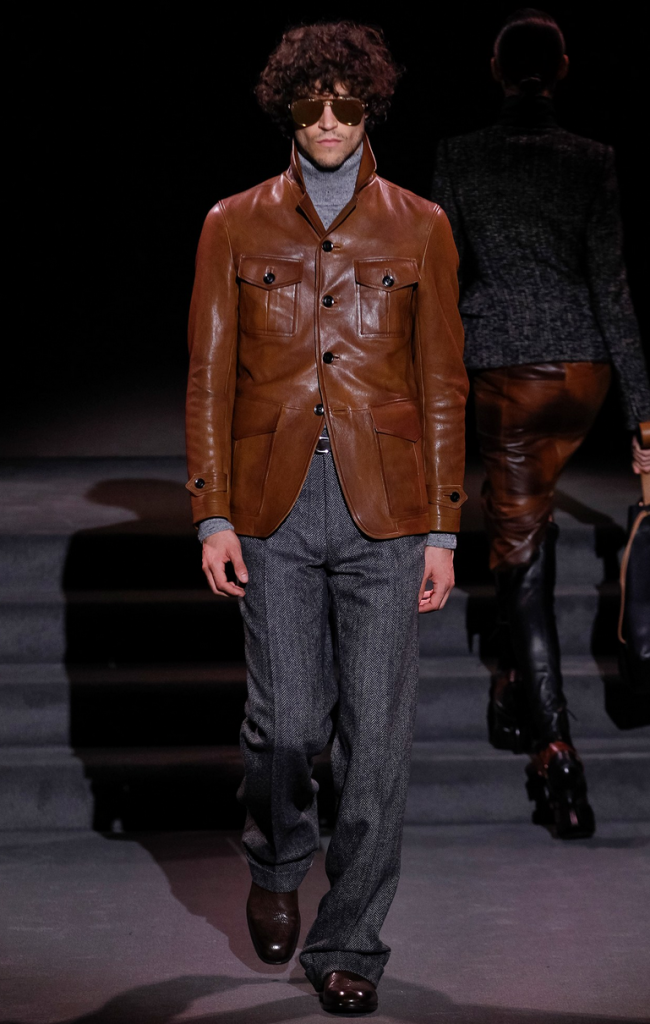 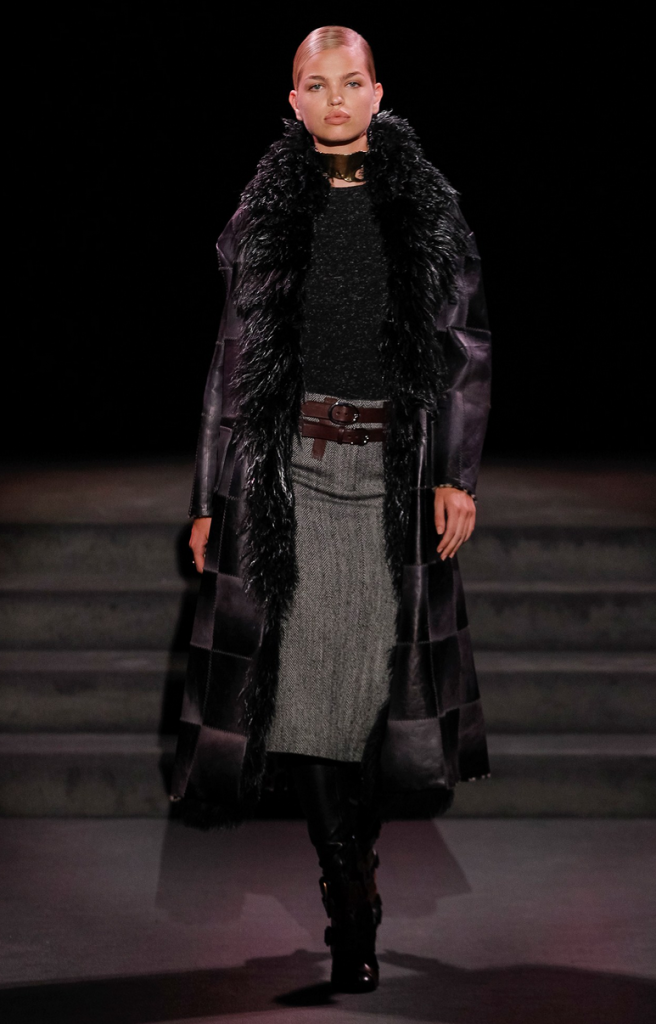 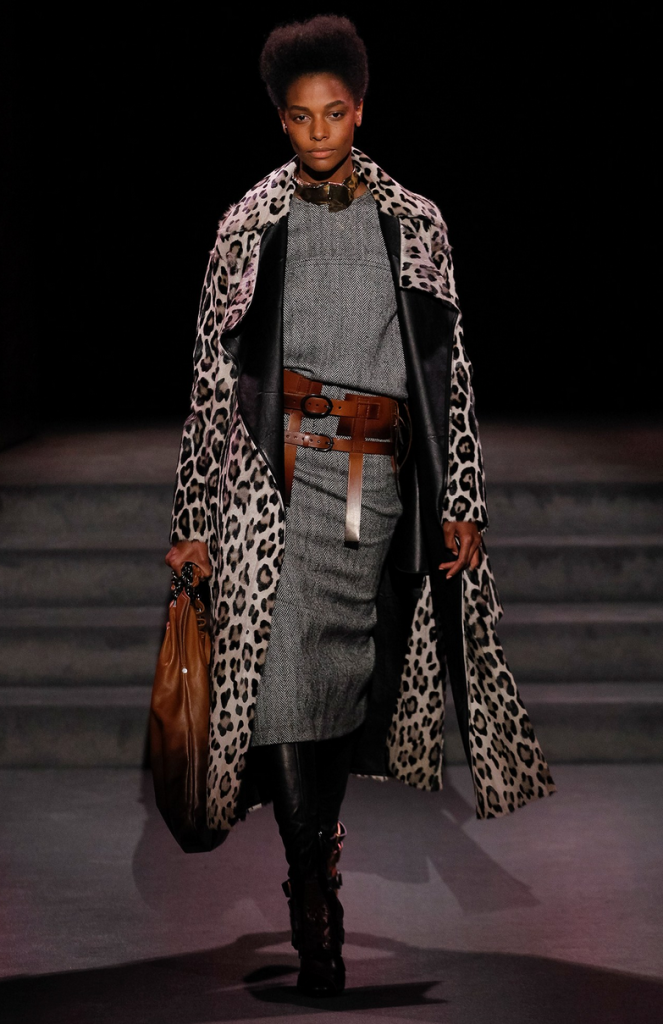 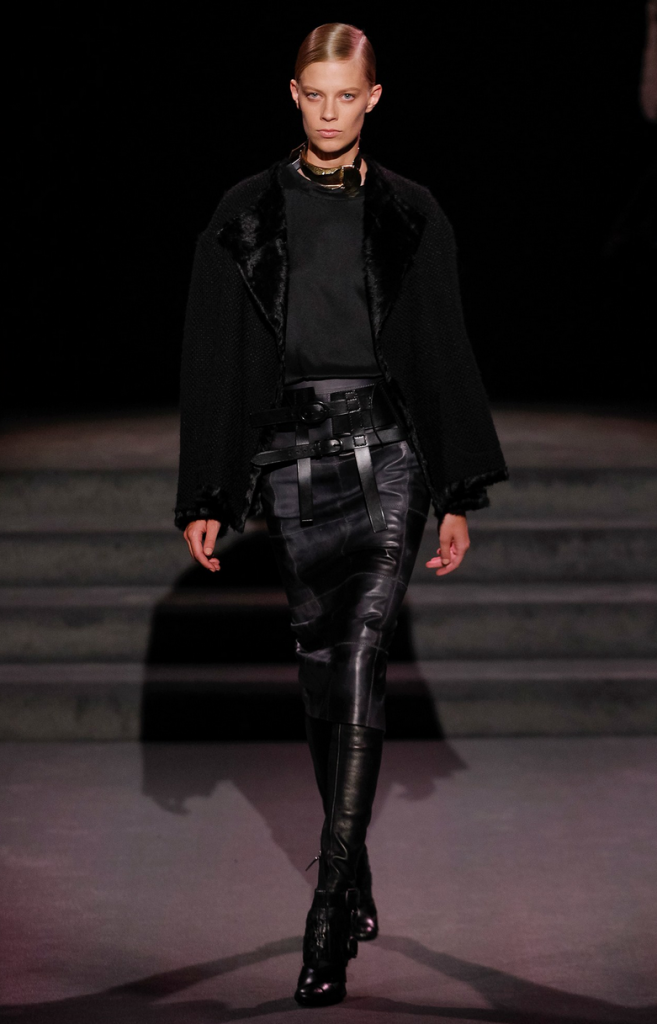 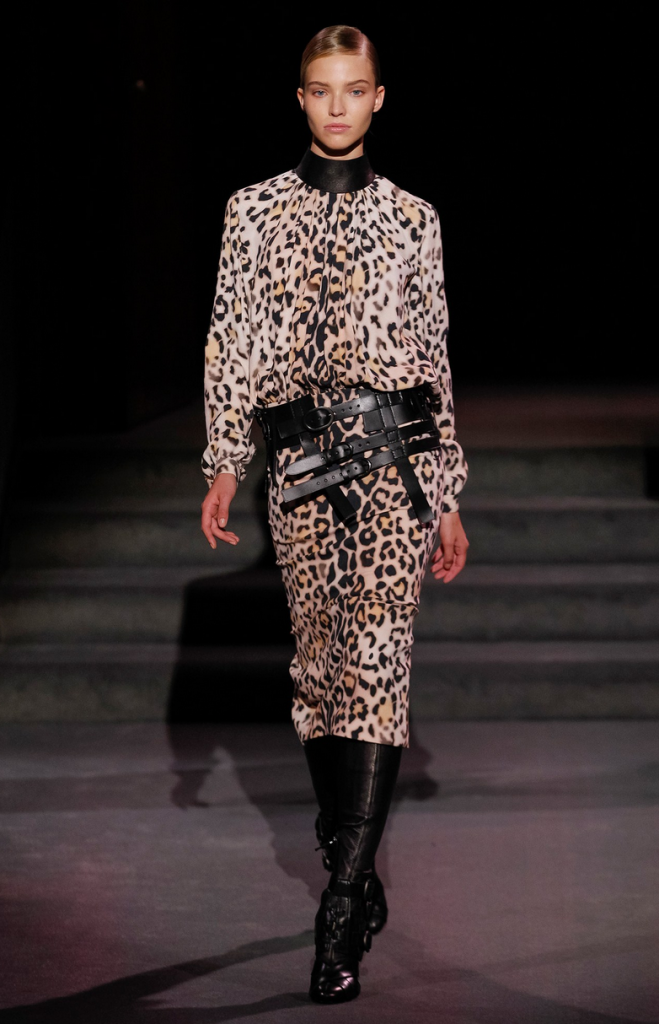 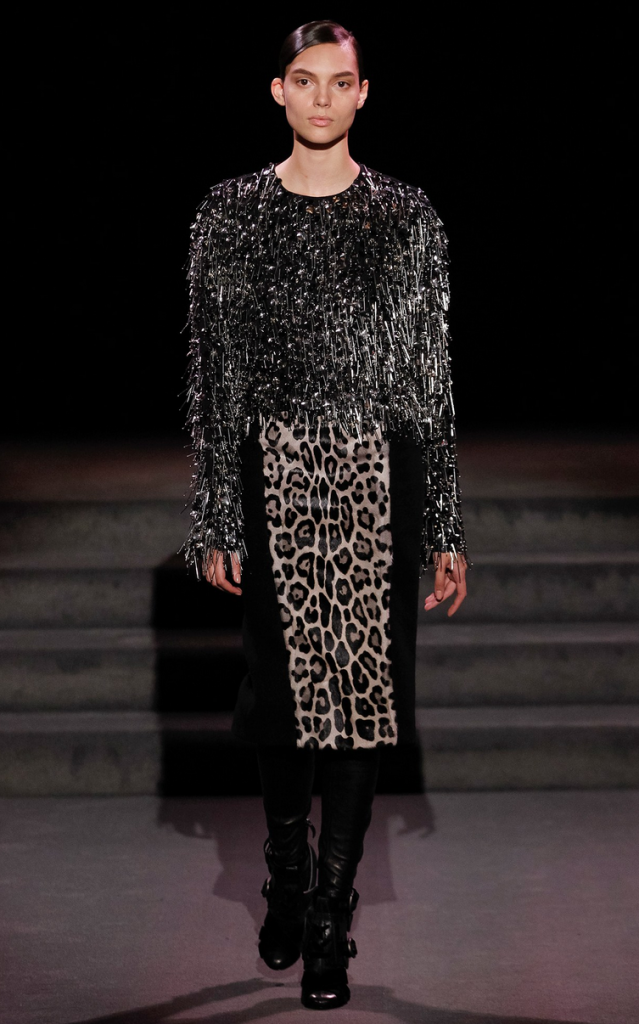 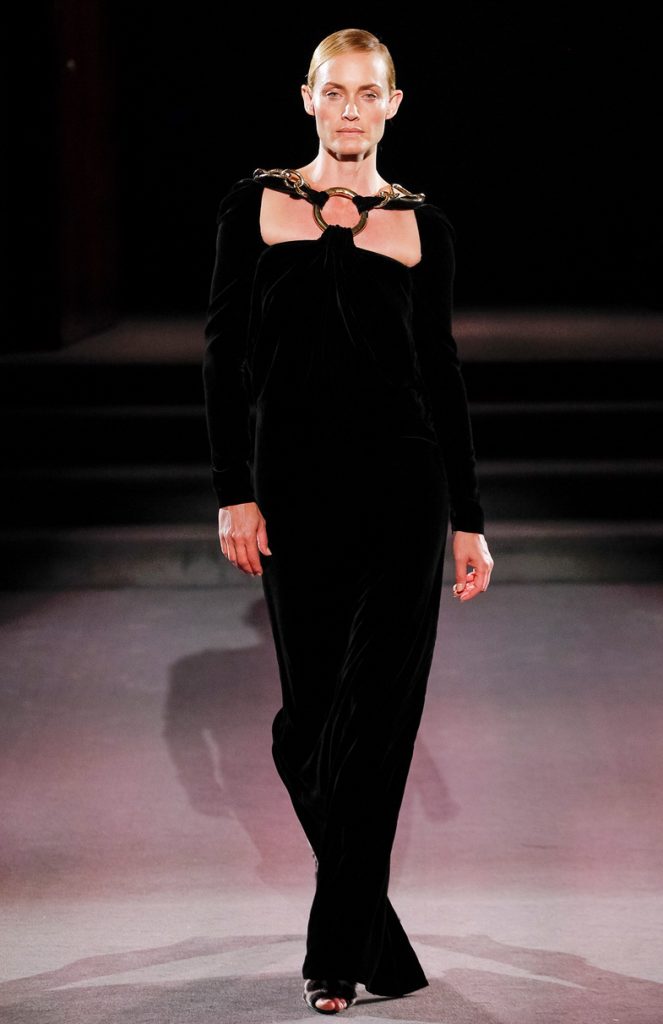 THE INTERVIEW from VOGUE.COM

You couldn’t fiddle with the collection because it’s been produced, right?
It’s hanging downstairs, hanging, steamed, ready to be flipped into the store tomorrow night.

And the same goes for your wholesalers.
Absolutely, it’s at Bergdorf’s, it’s at Neiman’s. They’ve photographed it for their catalogs, they had to sign non-disclosure agreements, they couldn’t leak any pictures. So it’s done. It’s all over the world ready to go into our stores. I can’t change a thing. I can change the hair and the makeup.

How does that feel? It’s really flipping the switch.
It’s kind of great, because also I haven’t looked at the clothes since I did them. Luckily, I really love them and I’m not tired of them. So, I think it feels good. I don’t know if this will be sustainable. We’ll have to see. I’ll have to see how it works; see how our customers respond to it. The weird thing is, there’s no long-lead press because I’m not showing it to anyone. So, I don’t know how that’s going to work going forward, having no clothes to send magazines.

Any anxiety about that? Will that cycle correct itself so you could have clothes for magazines?
I don’t know, you know, I’m contemplating starting, for lack of a better name, Tom Ford Atelier, because I do constantly dress celebrities. I do constantly create things for Beyoncé on tour, for Rihanna, so I might create capsule collections in between the [main] collections for celebrities, and then once they wear them, then put them immediately in the store. We’re going to have to see how this goes. Now, the clothes that I’m showing tomorrow will be in the store; they don’t get marked down until January. So who knows, if someone loves something tomorrow, they’re certainly available to be photographed, but they won’t be able to make it into anything except the November issue. Or, certain magazines can turn around in two weeks. I’m the only one doing this other than Burberry and a few other people, but if the whole industry starts doing this, then magazines will have to go to a much quicker turnaround.

Was it important to you to be first?
It was funny—I had thought about it, I had done the research, we had figured out how to do it—and I panicked and didn’t do it. And then Christopher Bailey [at Burberry] announced it, and I called him that morning and said, “Goddamn it, you announced this first; I’m going to do it too.” And then I sent out the announcement as well. But Christopher beat me by about four or five hours, and he gave me the confidence to try it as well.

And now there’s a groundswell.
It’ll be interesting to see if the designer market latches on. It’d have to change the timing of shows. One of the reasons I had to do it in New York and not elsewhere was because this merchandise needed to be in the stores in August. I couldn’t have held it much longer. To put them in on September 7 or 8 is okay, because our customer really is away; she comes back on Labor Day and she starts shopping. If I had to stretch it out to Paris I’d be losing three or four weeks of key sales, so the other thing would be to do it during couture.

So being first didn’t impact showing in New York; needing to have them on the sales floor did. I had been wondering if this collection would feel “New York” the way the collection you did on the eve of the Oscars last year felt “L.A.”
I think it’s, I hope it’s international, which is where we are. However, we are showing in L.A. in February the Friday before the Oscars and I’m finishing that collection in the next two weeks. I’ve been working on it over the summer, and I’m very well aware that it’s going down a runway in L.A. during Oscar weekend, because you still kind of need to think about concept and your audience.

You are a designer who went to Hollywood and at this moment we have celebrities getting into fashion. What do you think of the Kanyes and Rihannas getting into this business?
I think if they have a lot of personal style and they’re willing to devote a lot of personal energy, it can be good. I think a lot of people underestimate how serious our business is, how hard you have to work, and how dedicated you have to be. It is a tough, tough, ruthless industry and it takes a lot out of you. And so, if you’ve got a lot of style, as Rihanna does, and you’re willing to put a lot of energy into it, great. I sat next to Victoria Beckham the other day on a plane going from L.A. to London—she’s a friend—and I said, “Do you miss performing? You know, I actually forget that you were a performer because you’ve embraced what you do now as a fashion designer.” You know, she’s starting a beauty line. She’s very serious about it. And if you’re very serious about it, absolutely, great. If not, it can be hard.

Why the Four Seasons?
I wanted something intimate. I wanted a dinner set up. I didn’t want a regular show. I think that’s one of the chicest rooms in New York. I’ve always loved to eat there. Philip Johnson was someone I came to know toward the end of his life and I used to go pick him up upstairs and we’d go for lunch there. And I just love that room; it felt right, so that’s where we’re doing it.