So, not having been there to witness the luxurious chaos I thought it best to share this article from THE TELEGRAPH as it’s so awesome I feel like I was there. THANK YOU SO MUCH LUKE LEITCH!

Karl Lagerfeld and his team turned the Grand Palais into an enormous, lavishly stocked Chanel hypermarket – and the clothes weren’t bad either 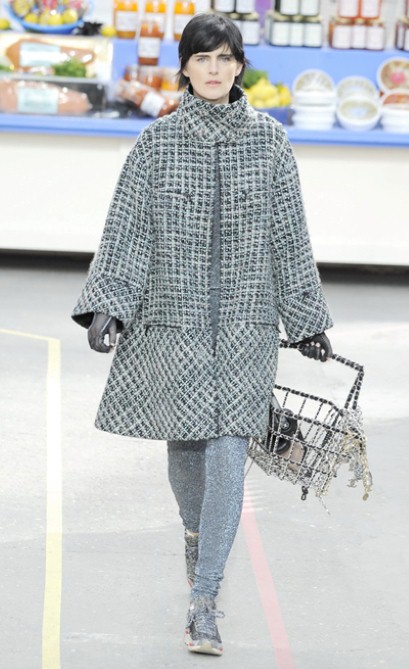 If one overlooks the looting, today’s Chanel show was easily the most magnificent of all Paris Fashion Week (albeit with Louis Vuitton still to come).

Karl Lagerfeld and his team turned the Grand Palais into an enormous, lavishly stocked Chanel hypermarket. The aisles were backed with tins of Chanel-branded tea, coffee and ‘Coco’ (hoho!). Posters pitched a special on coconuts, and the enormous caisse – complete with checkout desks – was spread under a drawn sign of Madame Chanel pushing a shopping trolley.

There were real trolleys, also double-C’d, and this most shopaholic audiences immediately started pushing them around in glee pre-show. There were wonderfully bizarre little corners – the hardware section had Chanel spades, Chanel doormats, and Chanel hammers. Before the show began, a PR assured me that all the food left on display would distributed to the homeless of Paris after the audience had departed – this evening, the boulevards will be thronged with clochards eating extremely exclusive crudités.

Once they could get us all to sit down and stop taking selfies – I nearly lost an ear to a bouclé-clad mademoiselle wielding a gold-bladed Chanel chainsaw – the show began.

In between classic schlock rock, a tannoy announcer breathed the deals of the day as models browsed the aisles in slim fit track pants, trainers – some of which were mid-calf-high – crop tops and trashy-fabulous oversized bouclé overcoats. The colours were loud and their hair braided and tangled like a pile of unwanted receipts. As the show progressed, the models began to stray from their routes, pausing here to contemplate the cotton wool – that eye-make up was pretty heavy – or peruse a pair of gardening gloves.

Stella Tennant carried a Chanel shopping basket in house chain-link. A fellow browser pulled a black leather Chanel quilted shopping trolley with double-C wheels. Cara Delevingne idly picked up a feather duster, then browsed on, a chain at her navel. One girl pushed a trolley with a Chanel bag that had been vacuum-wrapped with a ‘100 per cent lamb’ sticker attached to it hanging from the crook of her arm.

There were pink bouclé shades, a padlocked necklace, lots of metallic slim trousers and noise-excluding Chanel headphones to zone out and shop in. These girls bopped around on the browse but then suddenly there was a surprise cameo by a couple – he mustachioed and be-jacketed, she Stepford Wifelet in a baby pink Chanel suit – who were laden contentedly down with Rue Cambon shopping bags.

It was a marvellous mise-en-scene. The clothes, especially the shoes, were made with all the craftsmanship and luxuriousness that Chanel represents – but came cut for a world in which women (and men too, natch) are as likely spend as much time in supermarkets as benefit galas. The colours were as garish as the look-at-me labels on Chanel’s own brand tins, jars and pasta packets.

It is years since Moschino first plastered his clothes with product-packaging motifs – and Anya Hindmarch did it in London only a month ago. At this Chanel show, those quilted shoppers apart, Lagerfeld did not need to make his clothes badges of consumerism – they are that well enough already. Instead he framed his clothes in the consumerist culture of which Chanel is an apex brand.

And then came the (unwitting) looting. That announcer told the models the store was closing, so they skedaddled backstage. As the audience rose, some rushed to the shelves – with the doormats proving particularly popular. I tried to see if the ear-slasher got her chainsaw, but she was lost in a tweedy tangle of reaching hands. As that PR had suggested I go for it, I picked up a high-visibility gilet to wear in my allotment – so chic! – and a Chanel coffee tin for the kitchen. Alas, it turned out that only the fruit and vegetables were on offer. We put down our booty, picked up an ‘Aristocrate’ Chanel tangerine, and chewed it over.

All Chanel pictures by AFP or Isidore Montag 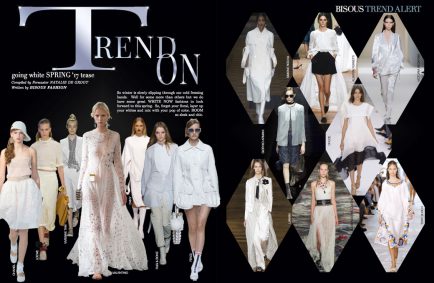 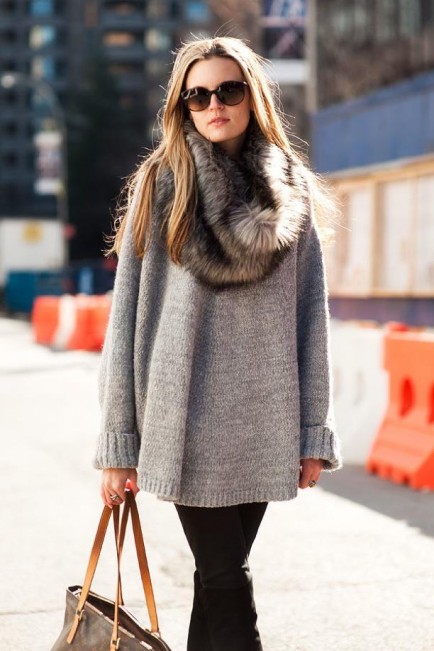 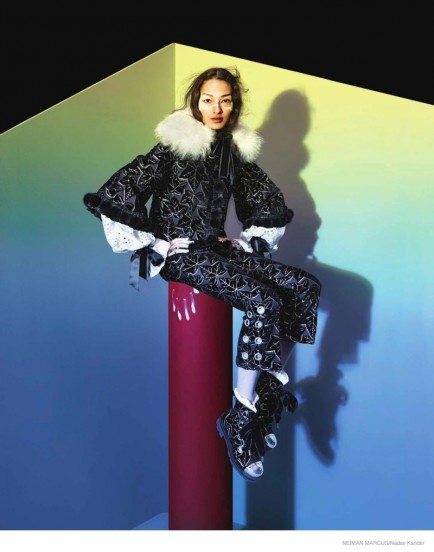